It is been a hot minute since I’ve reviewed a book here!  Rest assured, I’ve been plugging away at my Good Reads goal of 40 books this year.  I’ve just  been reading quite a few fluffy books because that’s exactly what I needed during these summer months.  Sometimes, there’s nothing more fun than a fluffy read you don’t have to think about it.  Now that I’ve gotten that out of my system, I’m digging into my stack of books to finish a few that I’ve been plodding through.

There are some that I probably won’t finish, which has been a really good lesson I’ve learned over the past year.  I am trying to put down books that I don’t want to read.  There are so many books in the world, it doesn’t make any sense to spend my time reading a book that doesn’t hold my attention.  With that being said, last week I started a book that wasn’t in my stack (my ‘stack’ being the pile of books I’ve started reading but haven’t finished).  The book is The Handmaid’s Tale by Margaret Atwood. 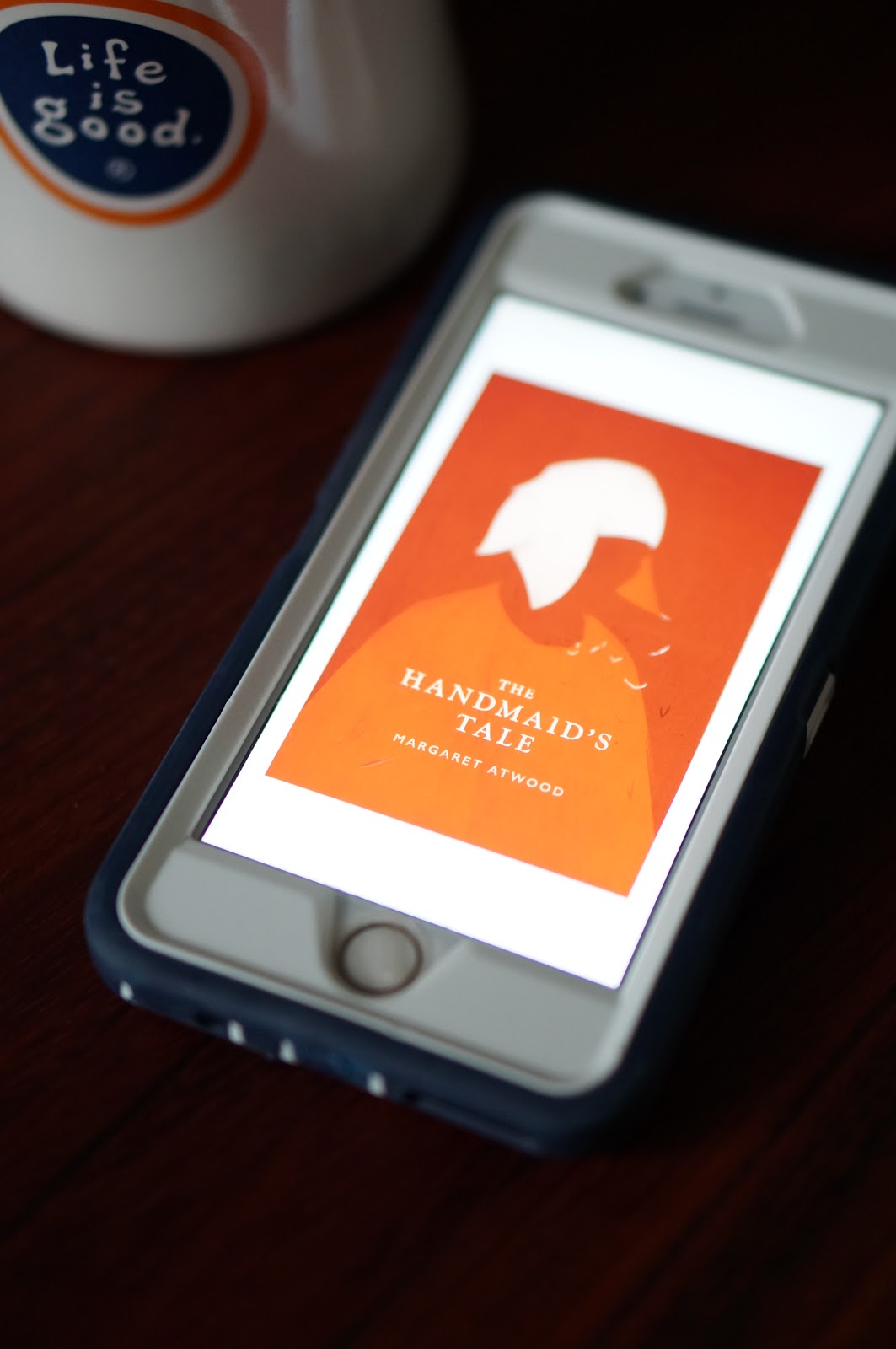 This book has been on my mind for a while for a couple reason.  One, I’ve seen the advertisements for the show quite a bit over the past year.  Sometimes, seeing a book come to life in a movie or tv show form turns me off reading the book, and sometimes it motivates me to read.  In this case, the show sparked my interest in the book.  Second, I tried to read a Margaret Atwood book years ago and hated it.  So many people rave about her books, but I always has the impression from that first book that made me think her works just weren’t for me.  I guess I was determined to find a book of hers that I like.

It’s unlike anything I’ve read before.  It’s also, apparently, a departure from Atwood’s other works.  Maybe that’s why I like it.  The Handmaid’s Tale is a dystopian novel set in the near future that follows Offred, a handmaid to a Commander stationed in city in what was previously known as Maine.  The United States of America have effectively disbanded.  The city that Offred lives in is walled, and I got the impression that the other cities across the US are walled as well.

There is an area called the colonies that people get sent to if they can’t contribute to the society.  Citizens are also executed for a wide variety of menial infractions.  The story is told from Offred’s point of view.  Her narrative is kind of disjointed.  While I was reading it, I couldn’t tell if she was a reliable narrator.  She seems to be going in and out of the past and present in her mind.  She remembers her husband and daughter from ‘the before,’ which means before society broke down.

One of the reasons that society started to crumble before the huge change was the declining birthrate, which directly relates to Offred’s being a handmaid.  In this new society, handmaids are women who had successful pregnancies in ‘the before.’  During the change, most of them were wrenched from their previous families.  Kids were given to families who didn’t have any and spouses were split up.  Offred never tells her real name, which is her name from ‘the before,’ but she does talk about her husband and daughter.

The handmaids are essentially trained to be baby machines.  They are rotated throughout the Commanders’ houses to procreate with the Commander.  They are held to very strict rules, and the general opinion of handmaids seems to be split in the society.  It seemed like people either admired what they were doing or they hated handmaids for what they were doing, which didn’t make any sense.  It didn’t seem like the handmaids had a choice in what they could do, they were simply forced into it.  Of course, the story was from Offred’s perspective so maybe that has something to do with it.  It could be that she felt forced into it, and so that’s how she interpreted the whole situation.  There were quite a lot of people around the handmaids at all times.  They were called either Guardians or Angels, and they were to keep track of the handmaids when they leave the house.

One thing that surprised me was how matter-of-fact Offred explains all the awful things that are going on in society.  Throughout the story, you get more and more details about how society declined and how Offred’s Commander and his wife probably contributed to a lot of it.  Another thing that surprised me was how relevant this book feels right now.  There are crazier and crazier things happening in the world, and it blew my mind to find out this book was written in the 1980s.  To think that this book still applies to the ‘now’ is pretty depressing.

Ironically, I didn’t find this book to be incredibly sad.  Offred seems hopeful and truly believes she will be reunited with her husband and daughter someday.  Don’t get me wrong, the book contains very heavy material; but, I wasn’t left feeling sad or depressed after I read it.  It was really interesting.  If you like dystopian novels in any capacity, this is definitely something I would recommend.

Have you read the book or watched the show?  I’d love to hear your thoughts on it!