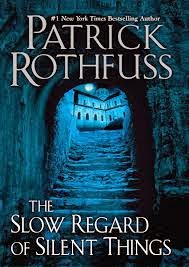 This is the third book, The Slow Regard of Silent Things, in the Kingkiller Chronicles by Patrick Rothfuss.  However, this isn’t #3!  Yeah.. there’s a little drama revolving around the third installment in this series that you can read on Goodreads (Patrick’s response is worth a chuckle) if you want.  Basically, the third one should have been released already, based on some dates that the publishers had set.  But, they’ve moved the date back a few times because Patrick Rothfuss is still working on it.  In the mean time, they released this novella that’s about one of the characters in the two main books.  We’ll call this Kingkiller Chronicles 2.5.  🙂

If you haven’t read any of the Kingkiller Chronicles, it’s a series about Kvothe, a young magician who was orphaned when his traveling troupe parents were killed by a “mythical” band of criminals.  The thing is, no one really knows anything about the criminals, except that they’re in a bunch of childhood fairytales.  They’re known as the Chandrian, but no one believes in them.  Kvothe believes in them and wants to find them and avenge his parents.  His journey has led him to the University, where he furthered his magic abilities, and to a far land where he was the Maer’s (basically, a king) right hand man.

The Slow Regard of Silent Things is about a woman named Auri (whose description is quite girl-like) who lives beneath the University.  There isn’t much known about her, except that she might be a former student of the University.  Her home is the series of rooms and tunnels under the school. And to be honest… nothing happens in this story.

In fact, I can’t count how many times I’ve read “this is a great book… but nothing really happens” in reviews of Rothfuss’s books.  And it’s so true, his books are just really great stories.  They’re not particularly feel good or sad or .. anything.

Despite nothing happening in it, this book is so good.  I read it very quickly and enjoyed it so much! It’s pretty much an account of Auri’s existence below the University.  To give you some perspective for how little actually happens, there’s a part when Auri is making soap that lasts for 8 pages.  Yes, that’s right.  Eight pages of soap making and it was so good.

And that, my friends, is how you know you’re reading a good book.

I have to apologize for the vagueness of this book review, but it’s such a simple book that there’s nothing to give away (as far as the ending) and there’s no summary (because nothing really happens). If you’re already a fan of the Kingkiller Chronicles and haven’t read it, I think you would enjoy this.  And if you haven’t started the Kingkiller Chronicles yet and love good stories, you should read it!  You definitely need to read the other two before this one, because there are little bits here and there in this story that tie into things in the other book that give you a sense of time within the storyline.

You can read my review of The Name of the Wind and The Wise Man’s Fear.

What have you read lately?