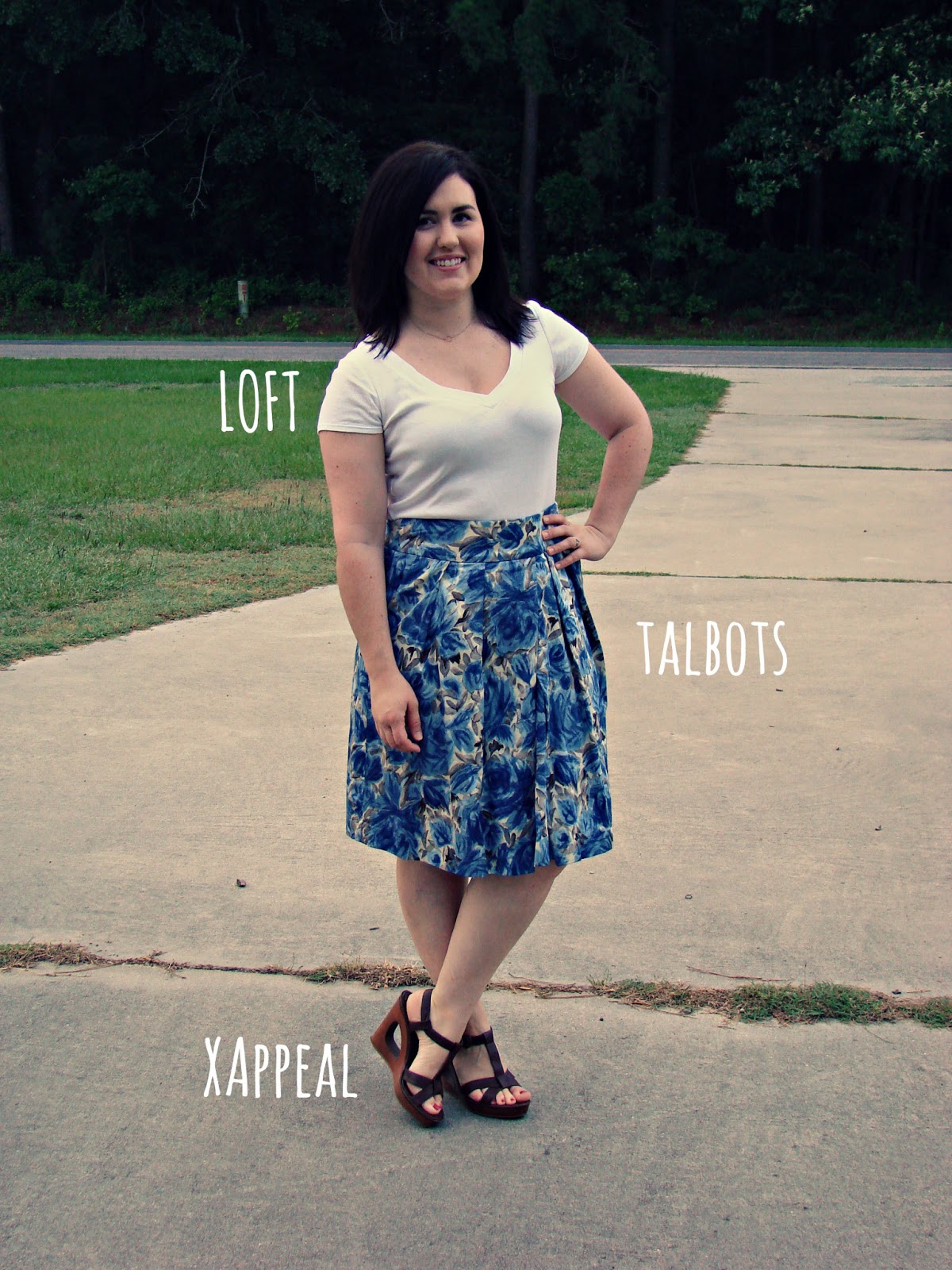 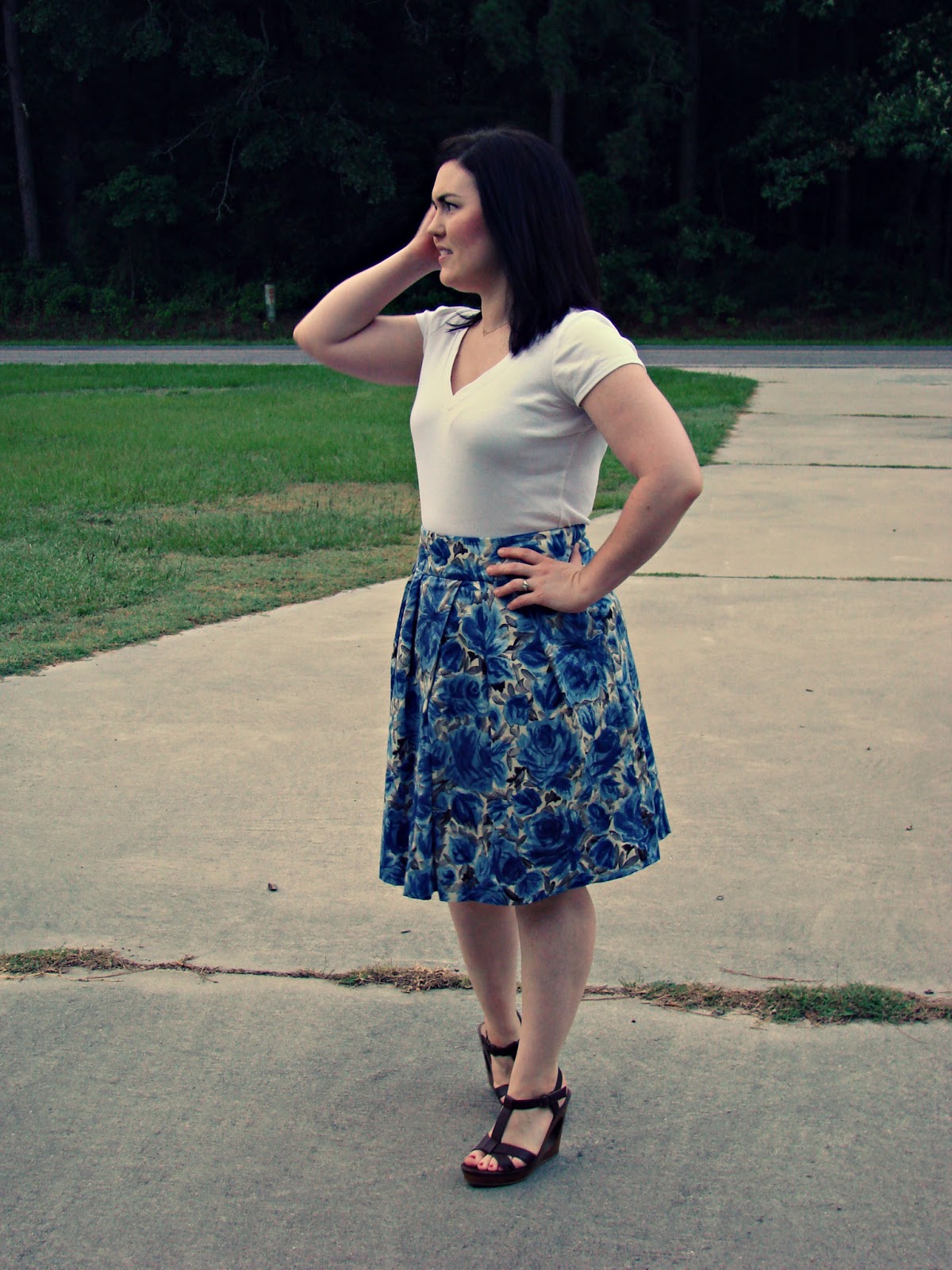 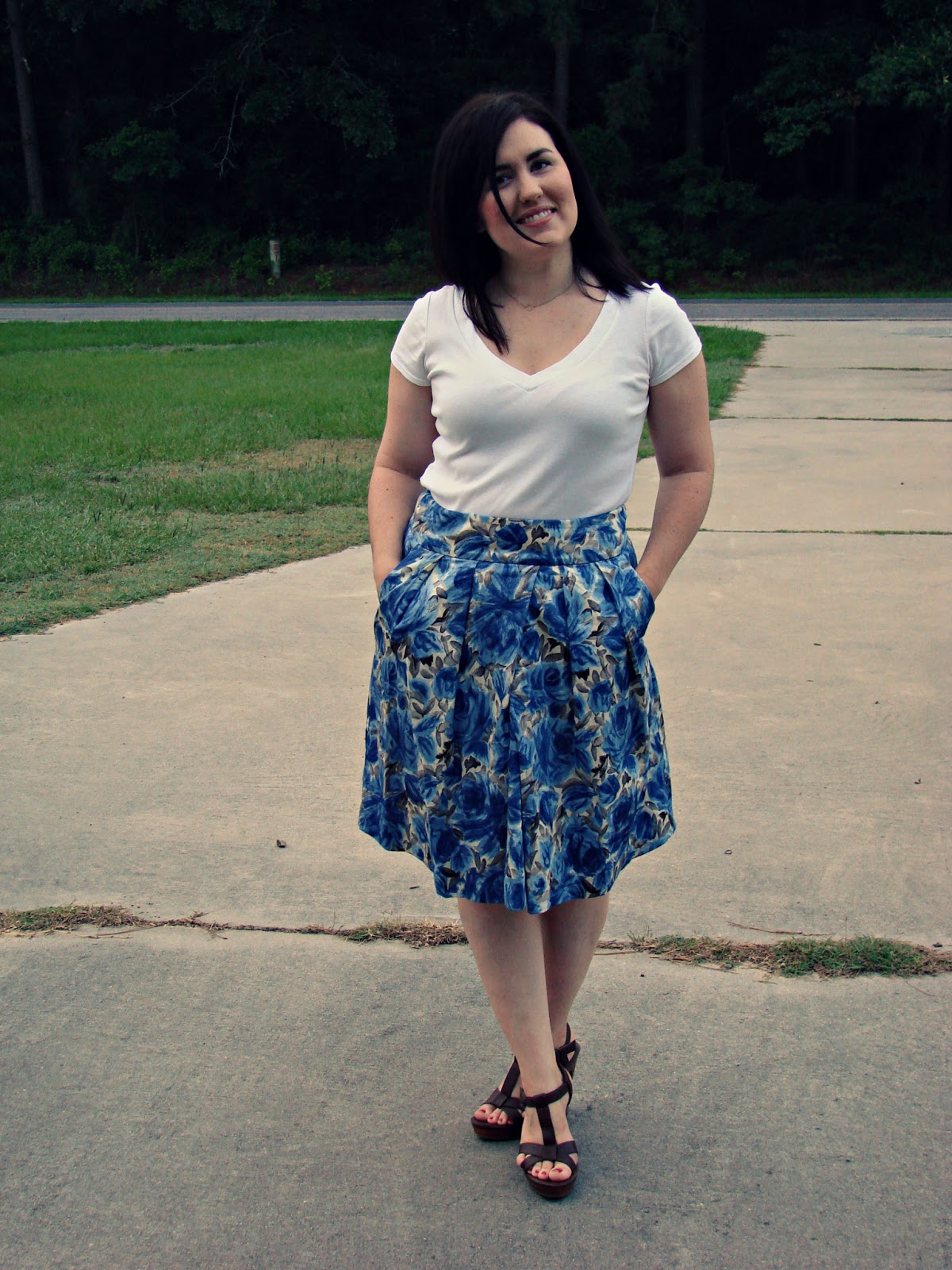 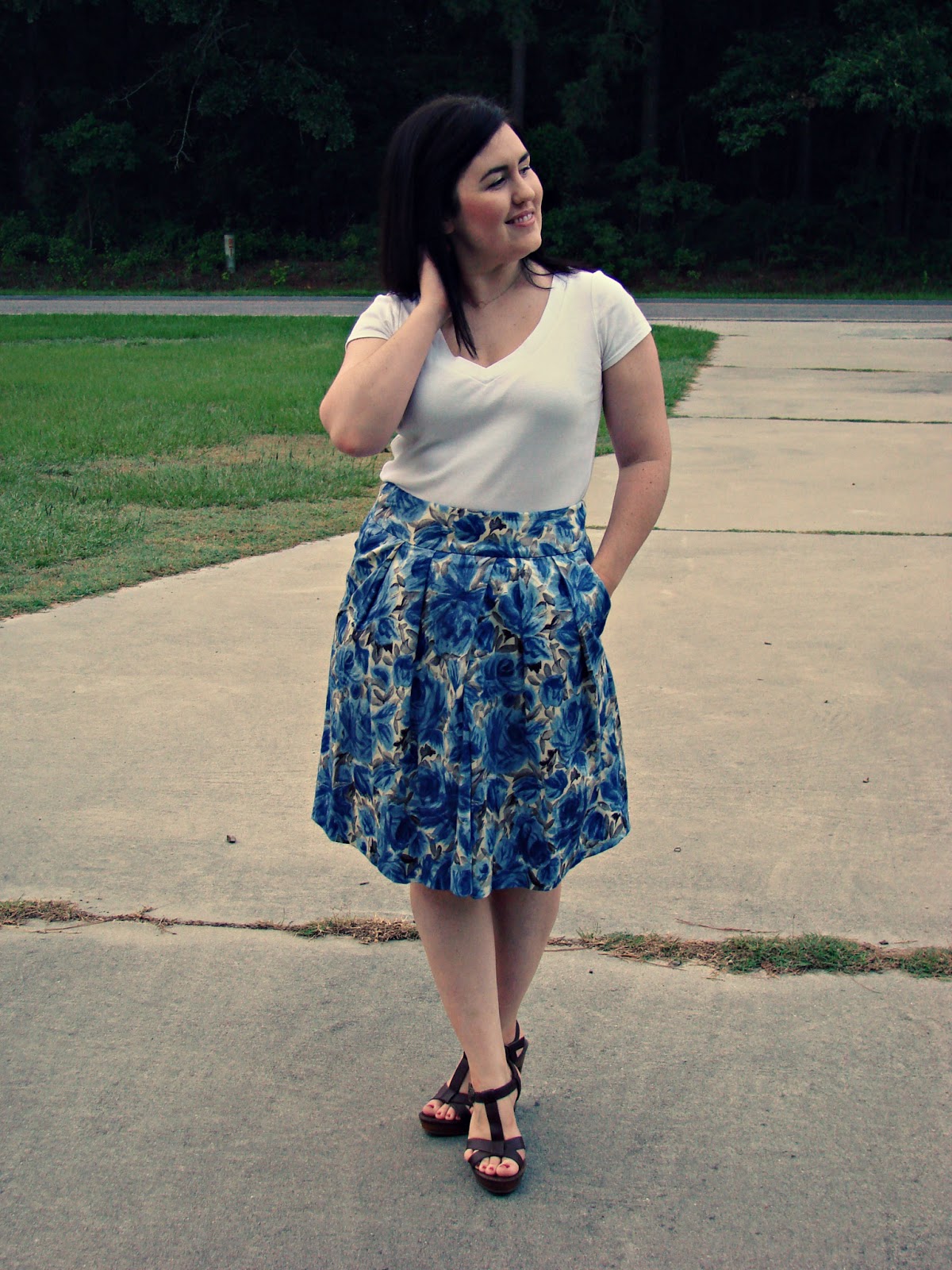 Today is a little different from my usual Wednesday posts.  I’m featuring one of my favorite styles of outfit to wear on Sunday.  For Sunday, I like to wear something nice yet casual.  After church, we usually eat with family but occasionally we’ll go out to eat.  We don’t live in a large city, but even so we have a ton of nice places to eat in my town and the surrounding area.

I’m participating in Social Fabric’s Restaurant Blog Hop, and as part of this series I’ll be highlighting a few of the best restaurants in my area.  Now, if you’re not from the South (or, North Carolina in particular), you might think that I’m about to give you a list of restaurants that serve fried food and pickled pigs feet.  But, I’m not.  I wouldn’t do that to you!  Plus, I don’t like pickled pigs feet.  …Not that I’ve ever tried that.  Bleck!

Anyways, without further adieu, here are some restaurants in Eastern NC that I think deserve a little pat on the back.

First, up we do have a lot of barbecue places.  I mean, this is North Carolina!  Before I lived here, vinegar-based barbecue was not a part of my foodie repertoire.  Now, it’s the only kind of barbecue I enjoy.

McCall’s Barbecue & Seafood Restaurant
This is one of the two popular barbecue places in town.  This is family friendly, and they serve every thing barbecue and seafood related.  Pork barbecue, fried chicken, shrimp, flounder, clam strips, hush puppies, fries, the usual country veggie sides (corn, string beans, boiled potatoes, baked beans, butter beans, slaw, potato salad, etc.), and a variety of homestyle desserts.  When we have a lot of family in town, this is where we go.  They have a buffet and a menu when you sit in or you can go to their take out window.  We’ve also used them to cater parties before, and they are great!  They are also open 7 days a week, 364 days a year.  They’re only closed on Christmas.

Wilber’s Barbecue
McCall’s “rival” barbecue joint is Wilber’s Barbecue.  They’re actually across the highway from each other!  Former presidents George H.W. Bush and Bill Clinton have both dined here, as well as Elizabeth Dole not too long ago!  They have been featured in a Washington Post article on North Carolina barbecue.  I won’t repeat myself by listing their menu, as it’s the “usual” barbecue items like McCall’s offers, but I will say that for breakfast they offer smart eggs.  What are smart eggs you ask?  Well …. they are pig brains cooked in scrambled eggs.  I, personally, can not bring myself to eat any part of the pig that isn’t “normal” to eat, so I’ve never experienced that particular dish.  But, to each their own!  If you’re interested in a little bit of Eastern NC barbecue history in a family setting, then Wilber’s is the place to go!

Hwy. 55 Burgers
If you’re in the mood for some old fashioned family dining, you’ll want to visit Hwy. 55 Burgers.  Now, the name might sound a bit odd, but this local restaurant chain started on Hwy. 55 in Mount Olive, NC, so the name is quite fitting!  They were originally named Andy’s Cheesesteaks & Burgers, and I still have a hard time calling it Hwy. 55 since they rebranded.  They’ve recently started expanding across the South East and as far as Ohio!  They serve old fashioned cheesesteaks, burgers, hot dogs, milk shakes, and fries.  They also offer a kid’s menu, which our kids love!

Now, if your town is like my town, you are not without a good local Mexican style restaurant.  We are lucky to have two that are locally owned!

La Paz
This restaurant hasn’t been around for a long time, but when it opened it was instantly popular.  They offer the usual Mexican-style fanfare with extremely affordable lunch and dinner combos.  It’s also located in a family-friendly area of town.  Everyone who works there is so nice!  Their service is fast, so if you need to be in and out during your lunch hour, this is the place to go.

Torero’s
If you’re in the mood to experience the downtown Goldsboro scene and want Mexican, then you can head down to Torero’s on John Street.  While La Paz does not serve alcohol, Torero’s has a separate bar if you appreciate the night life.  Salsa and chips and beer!  Oh my!  I probably wouldn’t head down to Torero’s for lunch simply because parking and service wouldn’t be fast enough to get in and out for an lunch hour.  But, I used to go there to eat on Fridays or Saturdays when I was single.  My favorite thing they serve is definitely their salsa.  It’s fresh and more like a pico de gallo than a salsa, and you can taste the fresh cilantro!  Yum!

Thai Garden
If you’re not in the  mood for Mexican but still want to go downtown to eat, there is an awesome restaurant in the same area as Torero’s that serves Thai cuisine.  I have always been skeptical of trying Thai food, because I don’t like spicy food.  But, luckily curry comes in different heat intensities.  So, if you feel like you want something without a lot of heat, just make sure to ask your server for a recommendation!  If you visit Thai Garden, make sure to try their pad thai.  It’s delicious!

Sumo Japanese Steak & Sushi
If Thai isn’t your thing, but you’re still in the mood for some Oriental cuisine, you will definitely find something you love at Sumo.  Whenever I eat there or get take out, I make sure to order a hikari roll.  I’m sure that hikari sushi rolls are the same every where, but this is definitely the best of their rolls that I’ve tried so far!  They have three sections in the restaurant.  You can sit a traditional table or at the sushi bar or at a teppanyaki style table (where they cook in front of you).  For their lunch menu, they offer a meal that they call the bento box.  It’s basically a place divided into little sections, and each section has a different sampling of meals.  It’s kind of like an appetizer sampler, but super filling!  It’s my favorite thing to get during the lunch hour rush!

Narita Express
I had to include Narita Express in this series, because it’s the first place I ever tried sushi!  This is a family owned and run Korean/Japanese style restaurant.  They serve mostly Korean foods.  It’s all about the food there, which is what I like.  The restaurant room is super simple and is not where you want to go for ambiance (Sumo is more ambiance-y).  But, if you want really good Korean food, you go here!  Their take out is always super fast, too.  This is where we order bulgogi and sushi when we’re in the mood for that.

And last, but not least, a restaurant that offers a little something different.

Chef & the Farmer
This is a diamond in the rough!  This restaurant is located in downtown Kinston, NC.  It’s family run by a couple who used to run a catering business in New York City.  Vivian, the wife, is from this area and she and her husband were inspired to start this restaurant during a visit to her parent’s farm.  Their restaurant is unique in that they utilize local farmers’ produce, and their menu changes weekly and seasonally.  Not only is their philosophy beautiful, but the location is as well.  When you step inside, you step outside of Eastern NC and into a different world.  If you are prepared to spend $$$ on excellent cuisine, then go here!  It’s well worth the 30-ish minute drive from Goldsboro and you won’t be disappointed.  To give you an idea of the price, my husband and I spent about $100 on a Valentine’s dinner for the two of us.  It was absolutely delicious, and it was great that we were also supporting local farmers!

And there you have it, just a sampling of our best local restaurants in and around Goldsboro, NC.  I hope this inspires you to go out and try a new restaurant or two!  As for me, I’m going to drool a bit and wait for lunch…

Today, I’m linking up with Because Shanna Said So for Random Wednesday!

This website uses cookies to improve your experience while you navigate through the website. Out of these, the cookies that are categorized as necessary are stored on your browser as they are essential for the working of basic functionalities of the website. We also use third-party cookies that help us analyze and understand how you use this website. These cookies will be stored in your browser only with your consent. You also have the option to opt-out of these cookies. But opting out of some of these cookies may affect your browsing experience.
Necessary Always Enabled

Any cookies that may not be particularly necessary for the website to function and is used specifically to collect user personal data via analytics, ads, other embedded contents are termed as non-necessary cookies. It is mandatory to procure user consent prior to running these cookies on your website.